PASSAGE OF PLAY : A rationale

Click here for :-  passage of play front and back cover

One of the best books on  cricket ever written, ‘Beyond a Boundary’ is unusual in a number of ways.  The author, C.L.R. James was an academic, versed in the arts and social history. West Indian, a native of Trinidad, writer and  political activist,he was also an astute observer of the  human condition and a perceptive commentator on the game of cricket.

In the preface to ‘Beyond a Boundary’ he writes, ‘this book is neither cricket reminiscences nor autobiography.  It poses the question, ‘What do they know of cricket who only cricket know? To answer involves ideas as well as facts.’

‘Passage of play’ has been informed by that understanding. In some ways it  evolved with the writing.  Partly autobiographical, it begins with my being named after an Australian Test Match cricketer* and tells of my  growing love affair with the game.   I have come to understand the truth which James so eloquently expounds, that cricket is a reflection of human life and society. So I have related significant aspects of my own story through the lens of cricket..how it has informed  my perception of class, racism relationships, change, etc. The book explores this through  cameos of players & events.  In the introduction I say:  ‘For me, cricket, especially in its longer form, mirrors life in all its varied shades and meanings . In the interaction between play and lived experience, both humorous and serious, I have been enriched, enlightened and inspired.  What do they know of cricket who only cricket know? asked James.  Perhaps he might have added that only those whose lives have been marked by the experience of failure and tragedy as well as success, and happiness can fully appreciate the game of cricket.

The book retails at £9.99 and can be obtained from Warren  (w.bardsley39@btinternet.com). If paying by cheque please add £1.50 p&p

batsman, made over fifty first-class centuries, and was the first player of any country to score a century in both innings of a Test Match (the Oval 1909)

We are looking for an enthusiastic, creative and self-motivated person to work with us to lead and develop our ministry among children, young people and families. This will be a friendly and supportive working environment with opportunities for development and working with others.

The current work includes working with children and young people and volunteer leaders in the Sunday Club and our two thriving toddler clubs but we are also looking to widen our mission to youth and families through other events and activities.

An application form and further information is available from Vanessa Hearn at the Circuit Office, email: recruitsworcs@gmail.com

Walking frames, sticks, wheelchairs and other aids are needed.  We can ‘upcycle’ them to Sierra Leone as part of Deacon Marilyn’s Sabbatical Project.  A full container is planned for! Bring your items please at any time on Saturday 16th November. For further information contact Peter Cashmore, 07966 875 585.

For more information about this course, please contact Rev Malcolm Oliver on : malcolmoliver54@gmail.com  or 0121 373 0595 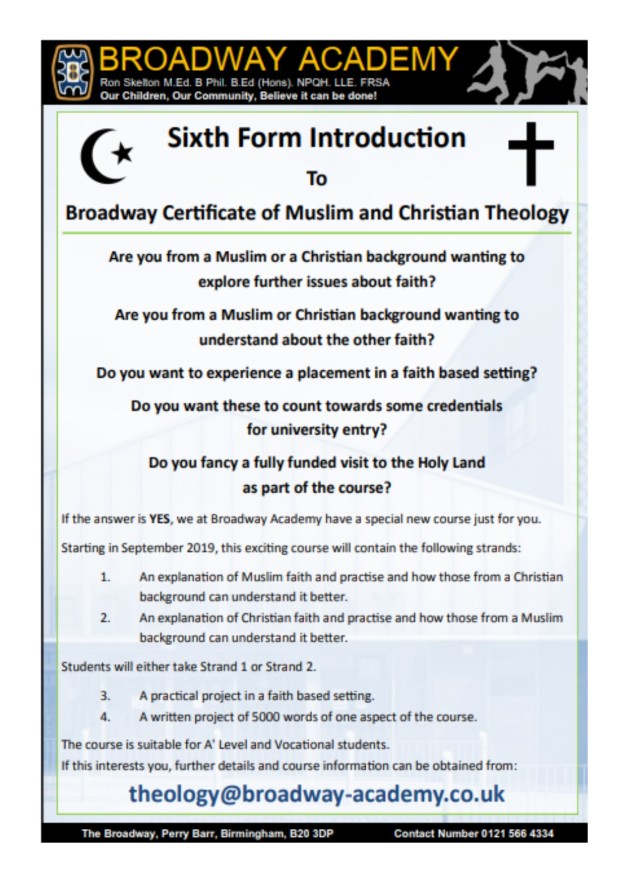 The Town Hall Box Office say that they hope that Stuart will come next year.

This is to be held at Darlington St. Methodist Church, 24 School St, Wolverhampton WV1 4LF on Saturday evening 21st September between 6pm & 9.30pm (doors open at 5.30).
Organised by Inspire You.
This Peace Concert will include a section on the rise of Knife Crime – the problem of it – and we hope to exhibit our Knife-Cross sculpture there.
See:  https://www.inspireyou.vision/inspire-you-peace-concert  Scroll to foot of the page and find a hyperlink to Eventbrite where you can register for free tickets. Or go direct to the Eventbrite site, and search Peace Concert, Wolverhampton. Parking in Fold St. Car Park, pay & display, WV1 4LP (or Skinner St. multi-storey).